« My Favourite Shows Are Supernatural, And Star Trek

This quote is from an example conversation Google showed in it’s blog post “Towards a Conversational Agent that Can Chat About… Anything” which describes their new chatbot “Meena, a 2.6 billion parameter end-to-end trained neural conversational model.”

The example is of Meena encoding a 7-turn conversation context and generating a response, “The Next Generation”. I’ve hot-linked the image below. 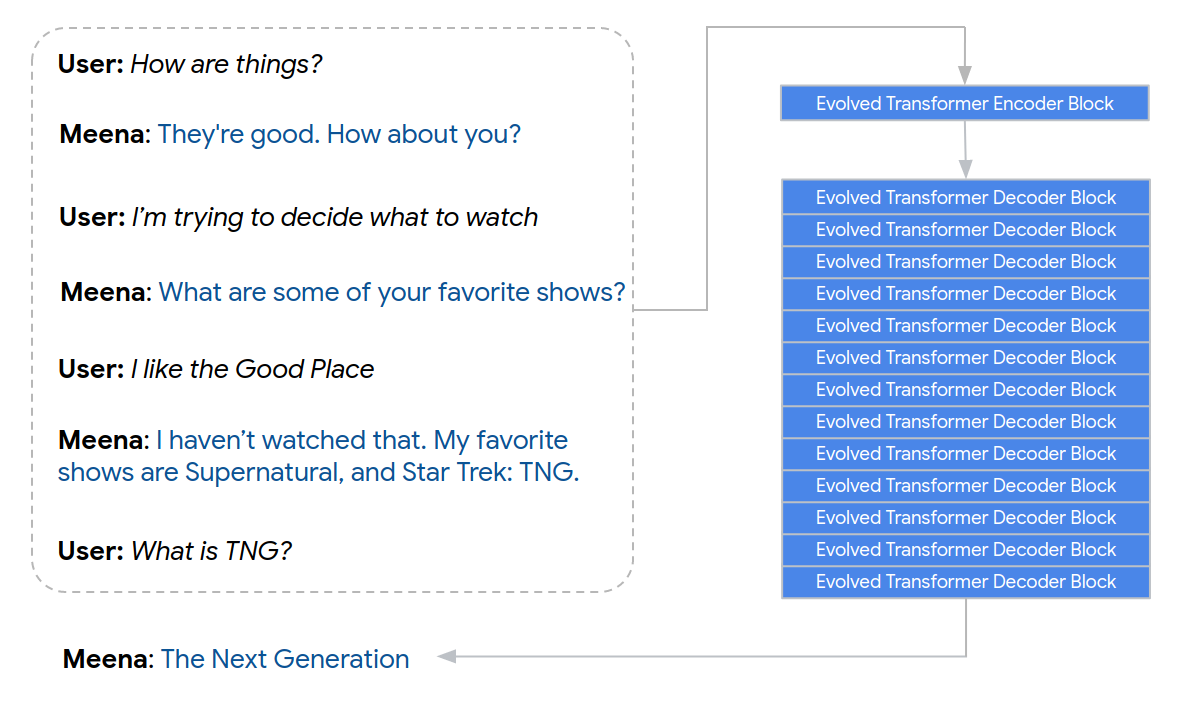 That quote really struck out to me reading through the blog post, and I kept thinking about it while reading the paper.

What does it mean when a chatbot says “My favourite shows are Supernatural, and Star Trek: TNG”? How did Meena decide that? Did it actually watch a bunch of shows and decide it was it’s favourite? Considering it was “trained end-to-end on data mined and filtered from public domain social media conversations”[1], I’d say it didn’t.

But how do you come up with Supernatural and Star Trek: TNG after being trained on social media conversations? Is it because they are popular? They both show up on IMDb’s “Most Popular TV" page. I'm sure the shows were talked about a lot on social media, but more then every other show?

Google uploaded a collection of conversations of “humans with humans, humans with Meena, humans with Mitsuku and humans with Xiaoice, as referred to in the paper” to their google-research GitHub repository.

And going through the Meena conversations, it looks very impressive. They weren’t too many “mistakes” or things Meena said that didn’t make sense (compared to other chatbots). I did find an instance of both the human and Meena being weird in conversation 11:

Not sure why the human needed to state that “Chicken is an animal”, but whatever.

But that still begs the question: WHY IS CHICKEN MEENA’S FAVOURITE FOOD? I’M PRETTY SURE THE AUTHORS DIDN’T SHOVE FRIED CHICKEN INTO A COMPUTER TO FEED MEENA.

This seems to be a pretty common question in the machine learning field. Do our models actually understand the things they are doing/saying? Or are they just regurgitating the things they were trained on? The fact that Meena says things that don’t make sense, makes me point to the latter. But neural networks are such obscure black boxes that I don’t think anyone knows for sure. And it will be especially hard to decide once our models become good enough to fool humans consistently.

We’ve had chatbots for a long time. ELIZA was created in 1964 and didn’t use any of our modern day neural networks. Instead opting for a simpler approach of “repeating what the other person said”. And with methods as primitive as that, people would still attribute human-like feelings to the computer program.

There’s a philosophical proposition called “panpsychism” which “is the view that mind or a mind-like aspect is a fundamental and ubiquitous feature of reality.”[2] Basically it’s the idea that all matter (animate or inanimate) is conscious, and we are just a bit more conscious than things like trees.

If you’re familiar with the psychologist Carl Jung, it’s in the same vein as his idea of collective unconscious, that “psyche and matter are contained in one and the same world, and moreover are in continuous contact with one another”.

Personally I think this is all bullshit. It goes against our understanding of physics. Particles aren’t conscious, they don’t think. As Keith Frankish explains:

“How do the micro-experiences of billions of subatomic particles in my brain combine to form the twinge of pain I’m feeling in my knee? If billions of humans organized themselves to form a giant brain, each person simulating a single neuron and sending signals to the others using mobile phones, it seems unlikely that their consciousnesses would merge to form a single giant consciousness. Why should something similar happen with subatomic particles?”[3]

I think that it’s just kinda interesting to think about as it’s almost impossible to prove or disprove, a bit like the idea of a god… but let’s not dive into that rabbit hole.

Issue 82 of the science magazine “Nautilus” explores panpsychism, and in it is an article “The Forest Spirits of Today Are Computers” which puts forward the idea of “artificial panpsychism”. It states that we are creating panpsychism by “placing minds everywhere and instilling seemingly inanimate objects with mental experience”.

From the article: “If it’s true that mind cannot emerge from mindless atoms and must be a new fundamental ingredient of nature, you can imagine mind engineering: assembling components not to perform some function, but to achieve some type of experience. And if not—if we can make minds out of mindless atoms after all—then artificial panpsychism is a straightforward extension of present technology.”

I’m not sure where I’m going with any of this, I’ve just talked about a bunch of ideas and problems no one has solved. It’s all kinda confusing, but hopefully I’ve given you something interesting to think about.